Travelling through Varanasi’s busy lanes, the tourist can see layer upon layer of the city’s history revealing itself. Every monument has a tale to tell and every corner boasts of a monument that attracts the tourist. Tourism in Varanasi is focused on the famous bathing ghats which loom large and are thronged with pilgrims, tourists and locals all day long. The city’s spirit never fails to bubble up in a riot of colors and hustle and bustle all around making Varanasi the perfect travel destination. It is the quintessential Indian city where tourists can experience different facets of the country’s culture. Travel and tourism in Varanasi caters to visitors of all ages and different tastes, beguiling them with facets of a city they would never have expected to see. 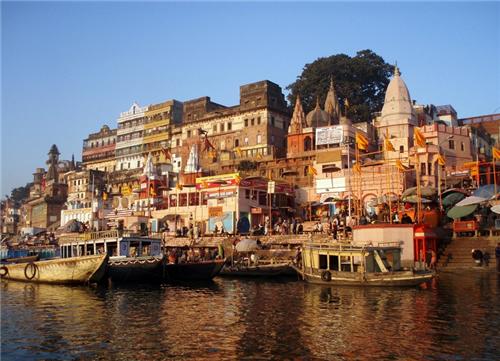 The golden domes and spire of the Kashi Vishwanath Temple beckon the devout from far and near. One of the 12 jyotirlingas in India, the Kashi Vishwanath Temple, also known as the Golden Temple, is the most famous Hindu shrine in Varanasi and one of the most revered in India. It is said to have been visited by the likes of Adi Shankaracharya, Tulsidas, Guru Nanak and Swami Vivekananda. Dedicated to Lord Shiva, the temple was destroyed several times and was rebuilt by Ahilyabai Holkar in 1780 with Maharaja Ranjit Singh donating one tonne of gold for the plating of the domes and spire. Shivaratri is celebrated here in a grand way. The temple is located in a lane called Vishwanath Galli and consists of a series of small shrines. The main linga is 60 cm by 90 cm and placed on a silver altar. There’s also a small well, Gynan vapi, in the temple complex. Five aratis are performed here each day. The temple is close to Dashashwamedh and Manikarnika Ghats.

Varanasi’s main ghat, it attracts the most pilgrims and tourists. According to legend, it was here that Lord Brahma sacrificed ten horses during the ashwamedha yagna. The evening arati at Dashahwamedh Ghat is a spectacle of sound and light with a group of priests performing the Agni pooja. The Kashi Vishwanath Temple is close by.

One of the oldest ghats in Varanasi, it is the main cremation ghat in the city. Devout Hindus consider being cremated here the path to liberation. Cremations here continue throughout the day and year. The pyres are supplied with logs of wood which are piled high all around the ghat. Doms, the people in charge of the cremation, can be seen attending to the pyres. The Kashi Vishwanath Temple is close by.

Overlooking the Ganga, at Tulsi Ghat, the Ramnagar Fort is where the titular maharaja of Varanasi continues to reside. It dates back to 1750 and is built of chunar sandstone. The fort displays many features of the Mughal style of architecture with several pavilions, courtyards and carved balconies. Within the fort is a museum called Saraswati Bhavan which is housed in the durbar hall. Its collection consists of various artefacts which belonged to the maharajas including antique cars, sedan chairs, palanquins, elephant saddles, silk costumes and swords. Also on display are an astronomical clock and a handwritten manuscript by Tulsidas. During Dusshera, the fort becomes the venue for various celebrations.

Situated on the banks of the Assi river, the Sankat Mochan Hanuman Temple was built by the university’s founder, Pandit Madan Mohan Malaviya. It is unique because in this temple Hanuman faces Lord Rama. The temple is believed to have been established by Tulsidas on the spot where he had a vision of Hanuman. It organizes a dance and music festival, the “Sankat Mochan Sangeet Samaroh” every April.

Located close to Dasashwamedh Ghat, the Jantar Mantar is among the five observatories built by Jai Singh II of Jaipur in 1600. Its unique feature is an equatorial sundial and the fact that its measurements can be monitored and recorded by one person. Its measurements still compare favourably with modern instruments.

Painted red, the Durga Temple is a model of the Nagara style of architecture. It is believed that the idol of the Goddess Durga here was not made but manifested itself. A rectangular tank called the Durga Kund is also located here. The temple is close to the Tulsimanas Temple.

This temple commemorates the spot where Tulsidas wrote his epic Ramcharitmanas. Built by a family from Varanasi, its walls are inscribed with verses from the epic.

The only temple in India dedicated to Bharat Mata, it’s unique because of the fact that it does not contain any idol. Its main shrine contains a relief map of undivided India depicting the landscape of the country. The temple is situated within the Kashi Vidyapeeth campus and was inaugurated by Mahatma Gandhi in 1936.

Also known as Birla Mandir, the New Vishwanath Temple was inspired by the Kashi Vishwanath Temple. It was designed by Pandit Madan Mohan Malaviya and is located within the Benares Hindu University campus. The temple is part of a complex with eight other temples in the vicinity.

Built in the south Indian style, the Kedareshwar Temple is dedicated to Kartikeya. Located on Kedar Ghat, devotees consider it auspicious to bathe in the Ganga and offer pooja here on Mondays.

Adjacent to the Kashi Vishwanath Temple, the Alamgir or Gyanvapi Mosque was built by Aurangzeb in 1670 after demolishing the temple. Its 71-metre minarets once dominated the city’s skyline but no longer do so after their collapse due to floods in 1948. The well, Gyan vapi, separates the mosque from the temple. It is located close to Dashshwamedh Ghat.

Situated at Sarnath, 13 km from Varanasi, the Dhamek Stupa, as it stands today, replaced an earlier structure built by Ashoka. Built in 249 BC, it commemorates the spot where the Buddha gave his first sermon. It is 43.6 metres high and has a diameter of 28 metres. The outer wall of the stupa is inscribed with various floral, animal and bird designs. Various dynasties have added to it down the ages. The Chinese traveller, Huien Tsang, mentions visiting it in the account of his travels. The monument has been well preserved and is set in its own garden.

The museum is a fascinating repository of ancient artifacts unearthed at Sarnath during various excavations. It has a collection of 6,832 sculptures and artefacts displayed in five galleries devoted to the Buddhist, Mauryan, Kushan and Gupta periods in Indian history. The museum’s most famous exhibit is Ashoka’s lion capital on which is based the national emblem of India.

In 1916, Benares Hindu University was established by Pt Madan Mohan Malaviya in a sprawling 1,300-acre campus donated by the maharaja. It's one of India’s premier universities and caters to more than 20,000 students from all over the country and abroad. It consists of four institutes, 14 faculties and 60 hostels. Established at the height of the freedom struggle, it served as a beacon of higher learning for the youth of the period. Monuments of note within the campus are the the New Vishwanath Temple, Bharat Kala Bhavan and Malaviya Bhavan.

The best time to visit Varanasi would be between October and March when it is generally cool to cold. It is hot and humid the rest of the year. The weather turns very cold December onwards, especially at night. During the day, the sun shines brightly.

Varanasi offers a range of transport for the visitor. Apart from public buses, there are autorickshaws, cycle rickshaws and taxis. The local buses tend to be very crowded. Cycles and motor bikes are available on rent too. Exploring the old city on foot would be the best option.

There are a number of tourist spots within 250 km from Varanasi. These include Vindhyachal, Chandra Prabha Sanctuary, Chunar Fort, Jaunpur, Allahabad, Bodhgaya and Kushinagar. Some of these places are suitable for a day’s trip.