There’s not a dull day in Varanasi with all the varied sights to take in. A one day tour can encompass most landmarks in the city with a few more if you can stretch it a bit. Begin the day early and go with the flow as it progresses. The city’s hustle and bustle increases and by mid-morning the city is in full swing. Slow down a bit in the afternoon so that you can extend your day to take in the maximum sights well into the evening. 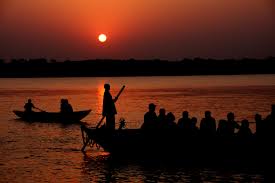 6.30 am: Sunrise at the Ghats
A boat ride down the Ganga is the perfect introduction to Varanasi. You can check out the early morning prayers of the faithful as the sun rises over the ghats. They gather here in droves to welcome each day and it is a stirring sight indeed to see them chanting their prayers, taking a ritual dip in the river and performing various rituals in homage to the sun. As the boat floats down the river most of the main landmarks of Varanasi come into view. You can see what makes the city unique from any other in India. Cast your eye over scenes which have remained unchanged since time immemorial.

8.00 am: Breakfast
Enjoy a delicious piping hot typical Varanasi breakfast. Join the locals and take your pick of sweet and savoury dishes from various tiny shops in any of the lanes in the old city. Piping hot jalebis served on leaf plates and steaming rabri or thickened milk will whet your appetite for more. Move on to spicy delights of aloo poori or parathas or even a masala dosa if you feel like it. End with some tea or coffee. Pack away some sweets or roasted peanuts to munch on during the day. 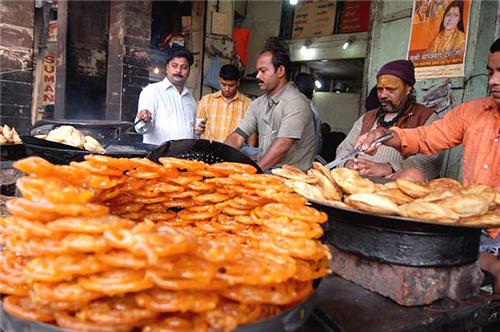 8.40 am: Kashi Vishwanath Temple
Fortified for the day with a wholesome breakfast, it’s now time to explore Varanasi. What better way to begin that by starting at the renowned Kashi Vishwanath Temple. Head to Vishwanath Galli, in the heart of the city, and make a beeline for the golden domes and spire glistening in the morning sun. The pooja’s are on in full swing and stand in queue to have a darshan of the linga which is mounted on a silver platform in the heart of the shrine. The temple was destroyed several times and was rebuilt by Ahilyabai Holkar in 1780 with Maharaja Ranjit Singh donating one tonne of gold for the plating of the domes and spire. Shivaratri is celebrated here in a grand way. A number of other small shrines exist in the vicinity and you can take a quick look at them before moving on.

9.30 am: Dashashwamedh Ghat
This is Varanasi’s main ghat. It is usually crowded all day long with pilgrims and tourists. Notice the priests or pandas conducting various rituals in the shade of their umbrellas. According to legend, it was here that Lord Brahma sacrificed ten horses during the ashwamedha yagna. Go down to the water’s edge and take a dip if you like or just watch others doing so. As far as the eye can see pilgrims are going up and down all the ghats lining the river, making for a riot of colour and motion.

10 am: Jantar Mantar
Jai Sigh II’s observatory, Jantar Mantar is close by. Head there for a look at an unusual monument. It is one of the five built by him in India. Its unique feature is an equatorial sundial and the fact that its measurements can be monitored and recorded by one person and its measurements still compare favourably with modern instruments.

10.30 am: Alamgir Mosque
The Alamgir Mosque is adjacent to the Kashi Vishwanath Temple. It was built by Aurangzeb in 1670 after demolishing the temple. Its 71-metre minarets once dominated the city’s skyline but no longer do so after their collapse due to floods in 1948. A well, Gyan vapi, separates the mosque from the temple.

11 am: Sankat Mochan Hanuman Temple
The next stop is the Sankat Mochan Hanuman temple, just off Sankat Mochan Road. Situated on the banks of the Asi river, which joins the Ganga downstream, it was built by the university’s founder, Pandit Madan Mohan Malaviya, founder of the Benares Hindu University. It is unique because in this temple Hanuman faces Lord Rama. The temple is believed to have been established by Tulsidas on the spot where he had a vision of Hanuman. Join other devotees for a darshan. 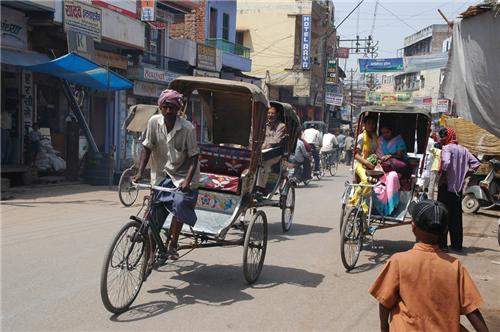 11.30: Bharat Mata Temple
Hop into a cycle rickshaw and head for Vidyapeeth Road for the Bharat Mata Temple. This is the only temple in India dedicated to Bharat Mata and it’s unique because of the fact that it does not contain any idol. Its main shrine contains a relief map of undivided India depicting the landscape of the country. The temple is situated within the Kashi Vidyapeeth campus and was inaugurated by Mahatma Gandhi in 1936.

12.00 noon: Shopping
Varanasi is renowned for its silks and handicrafts. Hundreds of small workshops churn out colourful and intricate brocade sarees and other garments. Visit Mehrotra Silk Factory, Sankatha Store, U.P. Cottage Emporium, Ganga Silks or Handloom House to check out their collection. Also take the opportunity to see the craftsmen at work. If you are interested in other souvenirs and gift items including carvings, carpets, brassware, silver and gold jewellery you can visit Chowk, Thateri Bazaar or Gol Ghar. Spend a fascinating one and a half hours picking out gifts for family and friends. 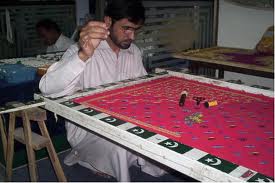 1.30 pm: Lunch
Relax after some hectic shopping with lunch at one of Varanasi’s many restaurants. Treat yourself to an elaborate thali with some delectable local specialities. Pure vegetarian saatvik thalis are also available and offer a variety of breads, rice and curries.

3.00 pm: Ramnagar Fort
After lunch go across the river to visit Ramnagar Fort. This is where the titular maharaja of Varanasi continues to reside. It dates back to 1750 and is built of chunar sandstone. The fort displays many features of the Mughal style of architecture with several pavilions, courtyards and carved balconies. Within the fort is a museum called Saraswati Bhavan which house a very interesting collection which includes various objects that once belonged to the maharajas. Also on display are an astronomical clock and a handwritten manuscript by Tulsidas. During Dusshera, the fort becomes the venue for various celebrations.

4.30 pm: Dhamek Stupa at Sarnath
The next stop is at the ancient Dhamek Stupa at Sarnath, just outside Varanasi. Built in 249 BC, it commemorates the spot where the Buddha gave his first sermon. It is 43.6 metres high and has a diameter of 28 metres. The outer wall of the stupa is inscribed with various floral, animal and bird designs. The original structure was built by Ashoka in 600 BC.

5.00 pm: Sarnath Museum
The museum close to the stupa is also fascinating. It has a collection of 6,832 sculptures and artefacts displayed in five galleries devoted to the Buddhist, Mauryan, Kushan and Gupta periods in Indian history. The museum’s most famous exhibit is Ashoka’s lion capital on which is based the national emblem of India.

6.30 pm: Manikarnika Ghat
Manikarnika Ghat is one of the oldest ghat in Varanasi. Watch the mourners complete the final rituals at this cremation ghat as the sun sets. 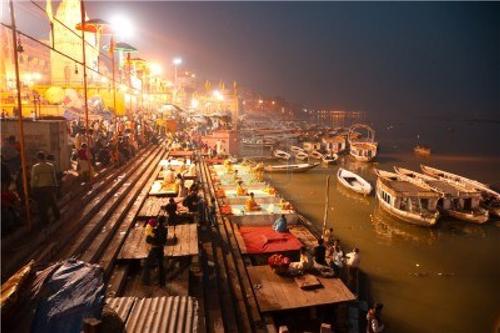 7.00 pm: Dashahswamedh Ghat
Back to Dashashwamedh Ghat for the evening arti which is a grand spectacle of sound and light with a group of priests performing it and chanting hymns in unison. It’s a perfect end to an activity-packed day at Varanasi. Relax by the steps and watch devotees perform the evening rituals as all temples in the city resound with the chants of the faithful and pealing bells. Sample some of the city’s flavourful chaat while you exchange notes with friends on what you liked best about Varanasi.