Home city guide things to do in varanasi

Things To Do in Varanasi

The multi-faceted city of Varanasi appeals to visitors of all ages and nationalities. Being in Varanasi is not just about sightseeing but experiencing life in the city. Going around city reveals layer upon layer of history, myth and legend. There’s not a dull day in Varanasi with all the sights and sounds.

Being the hub of spirituality in India, Varanasi has many religious sites including Kashi Vishwananth Temple, Dashashwamedha Ghat, Manikarnika Ghat, Sankat Mochan Hanuman Temple, Kedareshwar Temple, Bharat Mata Temple, Durga Temple, Tulsimanas Temple and many more. Other attractions include Jantar Mantar, Alamgir Mosque, Benares Hindu University, Ramnagar Fort, Dhamek Stupa and Sarnath Museum. Walk around the city or hop into an auto or cycle rickshaw to get from place to place. As you go around the city also look out for the unusual sights which make Varanasi different from any other city. 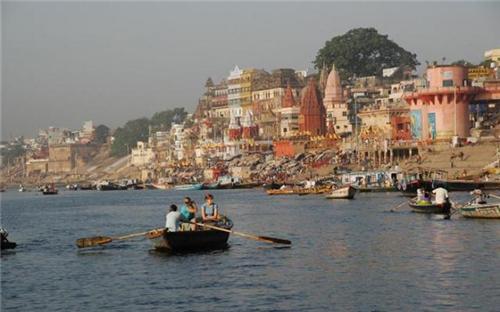 A boat ride down the Ganga is one of the most interesting things to do in Varanasi. One of the few cities in India with a well developed riverfront, Varanasi from the river is endlessly fascinating. Watch in wonder at the constant procession people and events at the river front. It’s a riot of colour and activity. You may also spot a crocodile, turtle or river dolphin, if you are lucky, at any time of the day numerous boats can be seen ferrying locals and visitors up and down the river. It could cost upwards of Rs 200 per hour for a boat ride. Sunrise and sunset are the best times to take a boat ride. If you prefer not to haggle with the boatman or want to hear about the history of the city and the various rituals, consider a conducted boat ride.

Varanasi is a very photogenic city and there are plenty of photographs to be taken. Take splendid sunrise and sunset shots of the bathing ghats, temples, monuments and photos of people at work and at leisure. There’s something interesting happening at every corner in Varanasi. Whether it’s a long shot or close up, photography in Varanasi is likely to quite different from anywhere else. However, photography most probably will not be allowed inside temples and at the cremation ghat.

Shoppers will find Varanasi fascinating. The city is not only an important silk weaving centre in India, famous for its Benarasi brocades, but offers any number of other souvenirs and gift items including carvings, carpets, brassware, silver and gold jewellery. Hundreds of small workshops churn out colourful and intricate sarees which are displayed in every street. Some of the best places to shop for silks in the city include Mehrotra Silk Factory, Sankatha Store, U.P. Cottage Emporium, Ganga Silks and Handloom House. The city’s main shopping centres include Chowk, Thateri Bazaar, Dashashwamedh Ghat, Vishwanath Gali and Gol Ghar.

Walking tours are also popular in Varanasi. Sightseeing on foot offers an intimate glimpse of the city. Explore the lanes and by lanes for an interesting, if hectic, look at the city. All lanes in the old city lead to the river front. So make your way slowly, pausing whenever you wish to check out a monument or do some shopping or even stopping for a minute to indulge in some delicious snacks.

Varanasi is a snacker’s paradise. Have your fill of a variety of chaats, sweets and cool drinks on offer in every lane. Ubiquitous street food vendors make sampling the local delights particularly easy. Varanasi is known for its tamatar chaat, pakodis, gulab jamums, lassi, falooda and thandai. Every dish is a combination of a multitude of flavor which burst in the mouth. Round off your gastronomic exploration with a Banarsi paan. You can sample a variety of other foods from all over the country.

The visitor can see craftsmen at work in their workshops in many parts of the city. The most common are the zari and zardosi embroiders in and around Varanasi working on silk sarees and other garments. Apart from them there are bell metal workers, silver smiths, gold smiths, potters, weavers, artists and wooden toy makers. They carrying on age old traditions which have been passed down to them. Watch them work with great skill and versatility.