Varanasi, the oldest living city on the western banks of River Ganga, is considered to be the holiest of all pilgrimages according to Hindu mythology. The omnipotent God took a form here as 'Kashi Vishwanth'. Varanasi is the first land of universe created by Him. Hindus strongly believe that this is the place that gives ‘Moksha’ irrespective of the sins that they have committed and want to spend the last phase of their lives here. Every creature who dies here attains ‘Moksha’. According to Hinduism, even if the whole world gets destroyed, Kashi remains intact. Hence, Varanasi became highly religious and attracts devotees from all over the world. It’s a city of traditional classical culture and has many temples that glorify it. 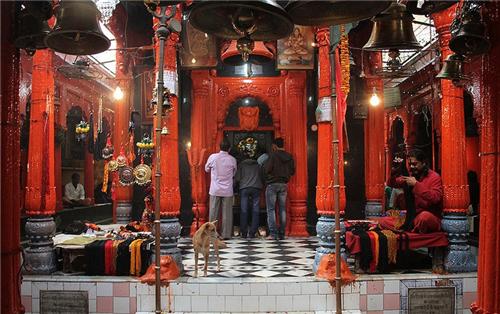 Kalbhairav temple is one of the most ancient temples of Varanasi located near the Visheshar Ganj. Lord Kalabhairav is the incarnation of Lord Shiva. He is the ‘Kshetra Palak’ of Varanasi and needs to be visited first. Devotees visit him first and seek his blessings and permission to have the darshan of Lord Kashi Vishwanth.

Kashi Vishwanath Temple is the most famous and important temple in Varanasi. It also known as the Golden Temple of Varanasi as the three domes of the temple are made out of pure gold. One of the twelve and powerful Jyotirlingas is situated here in this temple. The Lord here is known as ‘Vishwanath’ or ‘Vishveshwara’ meaning the ruler of the universe. His darshan delivers people from all their sins and give them ‘Moksha’. Devotees offer panchamrut, jal and flowers to Lord Vishwanath. Mangal, Bhog, Sandhya, Shringar and Shayan Aartis are performed to Lord everyday.

Maa Annapurna the Goddess of Kashi has her temple located at Dashashwamedha road, Vishwanath gali and close to the Kashi Vishwanath Temple in Varanasi. She is the incarnation of maa Parvati and is also known as the Goddess of Food or the Goddess of Nourishment. She blesses all the devotees so that they never suffer from hunger. Her idol is made of gold. After Diwali every year ‘Annacoot’ festival is celebrated here and piligrims visit her in large numbers on this day.

Maa Vishalakshi’s temple is located at the Meer Ghat on the bank of the holy River Ganges. ‘Vishalakshi’ means wide eyed devi. It is one of the famous ‘Shakti Peeths’ and it is believed that maa Sati’s ear rings fell here when Lord Vishnu’s chakra cut her body into pieces. Hence she is also known as Manikarni or Manikarnika. She is the incarnation of Goddess Durga. An important festival called ‘Kajali Tij is celebrated here by the women on the third day of the Hindu month Bhadrapada. Navaratri festival is also celebrated here with great pomp and show. 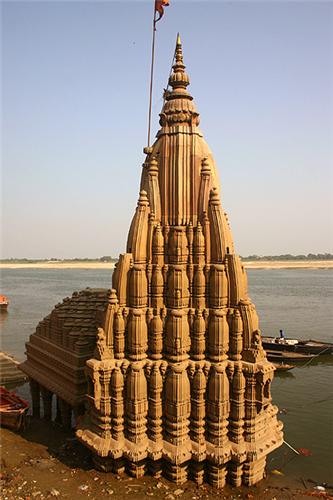 There is a famous submerged Shiva temple in Varanasi. Besides, Mrityunjay Mahadev temple is also one of the famous temples of Lord Shiva. Lord Shiva is known as Mrityunjay Mahadev as he is the god who triumphs over death. People from different parts of India visit this temple and perform ‘Mrityunjay Path’ over here. There is an ancient well in the temple premises and it is believed that its water cures many diseases.

Sankata Devi temple is located near Sindhia Ghat, Varanasi. This temple has Maata Sankata Devi which is a four armed idol. Lord Hanuman and Lord Bhairav are located on either side of Maa. There is also seen a huge lion inside the temple premises. Maa Sankata Devi is considered to be the most powerful Goddess of remedy. Pujas and aartis are performed everyday but Friday would be the most special day for her. It is believed that Pandavas offered their prayers here during their exile.

Tulsi Manas temple is Lord Rama’s temple and was built in 1964 near Durga Temple. It is made out of marble and one of the main temples of Varanasi. Wonderful landscaping around it makes it magnificent. It is believed to be the same place where Tulsidas wrote a great Indian epic ‘Ramacharitamanas’ a Hindi version of Ramayana. The walls of the temple are engraved with the verses and the scenes from the Ramcharitamanas.

Veda Vyasa was the author of the great classical epic Mahabharata. He also classified Vedas into four categories. He is considered to be the Kal Avatar of Lord Vishnu. His temple is located in Ramnagar, on the eastern parts of River Ganges. Lord Shiva banished him from Varanasi due to his bad temper. His birthday is celebrated as Guru Purnima or Vyasa Purnima. On this day devotees visit his temple to offer prayers.

Baba Keenaram Sthal is located in Ravindrapuri of Varanasi district. It is the Samadhi of Baba Keenaram. It is considered to be the Aghor Peeth. It is an ancient pilgrim centre visited by Aghoras, spiritual teachers, devotees, research scholars and documentary makers.

The Nepali temple is on Lalita ghat of River Ganges. It was built by the king of Nepal in Nepali style. It is designed in a magnificent way with the help of wood. It stands as one of the tourist attractions. It has a Linga inside and the statue of Nandi outside. The Lord here is called Pashupathinath Mahadeva.

Tilbhandeshwar temple is one of the oldest temples of Varanasi. Lord Shiva is in the form of a Linga here and it is a Swayambhuv Linga i.e., the Linga which emerged itself. Such Lingas are said to be more powerful. There is an interesting feature associated with this Linga which is 2500 years old. It increases every year by the size of a ‘til’. That is why Lord Shiva here came to be known as Tilbhandeshwar. A unique combination of Malayali and Banarasi cultures are seen here. All important religious ceremonies and festivals associated with Lord Shiva are being performed here. The idols of the other deities such as Maa Parvati, Vibhandeshwar, Bhairava and Lord Ayappa are also found here. This place is very serene and has a special silence and quite suitable for meditation.

The new Vishwanath temple is also known as Birla temple as it is built by Birla group of Industries. It is in the Banaras Hindu University campus. It’s a complex of seven temples including Vishwanath, Nataraj, Mata Parvati, Ganesh, Mata Saraswati, Panchmukhi Mahadev, Hanuman and Nandi. There are also idols of Lord Shiva and Lakshmi Narayan here.

Durga temple was built in 18th century in Ramnagar of Varanasi. The architecture of this temple is in Nagara style. The temple is made out of multi tiered spires of red color. There is a rectangular tank of water in the temple premises which is called ‘Durga Kund.’ Navratri is an important festival celebrated here.