Varanasi is one of most popular pilgrimage destinations of India which attracts the pilgrims from all over India as well as from all over the world. It is also home to Sarnath Museum Varanasi, which is the oldest on site museum in India founded in 1905. 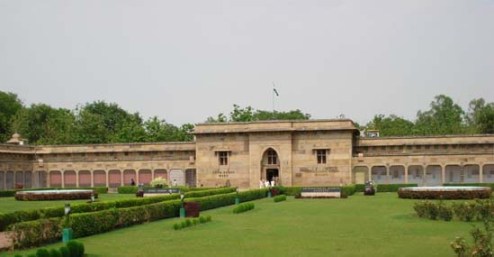 Located near Varanasi, Uttar Pradesh, Sarnath Museum has the distinction of being the oldest site museum of Archaeological Survey of India. The Sarnath Museum has the collection of sculptures and artifacts of Buddhist period. In 1905, the Director General of Archaeology in India, John Marshall initiated the construction of Sarnath Museum Varanasi to preserve the artifacts found during various excavation projects. This initiative was taken to keep them in the safe condition and display them for the visitors. Presently, it houses more than 6832 artifacts and sculptures.

Sir John Marshall, the Director General of Archaeology in India initiated the plan of constructing Sarnath Museum. His intention was to preserve and display the antique sculptures and artifacts which were found during the excavation projects at Sarnath. The architectural plans were prepared by Mr. James Ransome, who was Consulting Architect to the Government of India. The building of Sarnath Museum was completed in 1910.

The Museum has two verandahs and five galleries which displays the antique sculptures and other artifacts. The timing of these artifacts ranges from third century BC to 12th century AD which was found at Sarnath.

The fantastic collection of Sarnath Museum extends to five galleries and two verandahs. It houses rich collections of artifacts, edifices and sculptures which has numerous Bodhisattva and Budda images and the other ancient relics. The visitors can see and experience the finest specimens of the Buddhist art and other relics which are displayed in Sarnath Museum.

Although, there are many beautiful exhibits in the museum, the highlight of Sarnath museum is the Lion Capital of Ashoka. The National Emblem of India has been inspired from this museum exhibit. Other notable exhibits include the beautiful sculpture of Buddha from 5th century. In this sculpture, Gautam Buddha is sitting cross-legged, eyes downcast in deep meditation and halo around the head. Also, there are many beautiful figures of Boddisatvas which are displayed in the museum.

The other notable figures include life-size standing Bodhisattva and a bronze sculpture which shows Bodhisattva with several arms.

Sarnath museum also houses the best collection of the sculptures and figures from various periods such as Kushana, Mauryan and Gupta. The visitors can also see various images of Hindu Gods which date from 9th century to 12th centuries. The Sarnath Museum attracts archaeologists, tourists, history enthusiasts and the artists from around the world.

How to Reach Sarnath Museum

Sarnath Museum is located just 10 km away from Varanasi City. One can easily visit Sarnath Museum when you are visiting Varanasi. With its status as the city of temples and pilgrims, Varanasi or Benaras is very well connected to other cities in Uttar Pradesh as well as the other parts of the country. You can take any mode of transport which includes the road, rail or air to reach the Varanasi. From there, it is easy to reach Sarnath Museum.

Sarnath Museum is just 26 kms away from the Varanasi Railway Junction, which is also known as Varanasi Cantt Railway Station. It is the city’s largest railway station. It handles 240 trains and 3.6 passengers each day. The trains include passengers and mail or express trains. From the station one can use various services such as auto, bus and taxi services to reach Sarnath Museum. Sarnath has a small railway station but very few trains stop there.

Sarnath Museum is just 26 kms away in Babatpur from Lal Bahadur Shastri International Airport, Varanasi an international airport. As it is an important pilgrimage destination, Varanasi is well connected by air. Today, many companies such as Jet Airways, Budda Air, Jet Konnect and Air India operate flights to Gaya, Delhi, Kathmandu, Mumbai, Kolkata and Lucknow. From Airport, you can take taxis and buses to reach Sarnath Museum.

Timing - 9 am to 5 pm every day except Friday and other public holidays.

Entry Fee - Free entry for children less than 15 years of age and Rs. 5/- for others.
The facility for the Guide is also available in the museum premises.
The museum also organizes the visits of school students’ trip to the museum. The concerned schools just have to inform the museum about the visit before 2 days of the trip.

Best Time to Visit: The visitors can visit the Sarnath Museum throughout the year but the best time to visit is from October to March as the weather is very pleasant during this time.