Varanasi Police work towards maintaining law and order under the super command of UPP Force or the Uttar Pradesh Police Force. UPP is the Police force for Uttar Pradesh which came into being in 1861 when Indian Police Act became operational. It is by far the largest police force in the world under one command. 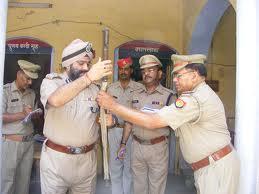 Uttar Pradesh is a huge area and to properly maintain law and order it is important to divide the same into various districts, ranges and zones. The total area of Uttar Pradesh is divided in to 8 zones, 18 police ranges and 75 police districts. Each zone here has 2-3 ranges and each range has 2 to 4 district. Such a zone is Varanasi Zone under which there are three police ranges Varanasi, Mirzapur and Azamgarh. Each range has 3-4 districts under them. Varanasi Police range has four districts under it, which are Varanasi, Chandauli, Jaunpur and Ghazipur. Mirzapur has 3 districts, Mirzapur, Bhadohi and Sonbhadra. Lastly, Azamgarh Police Range have Azamgarh, Mau and Ballia. Each district has Senior Superintendent of Police from Indian Police Force, assisted by Assistant Superintendent of Police (SP) and Deputy Superintendent of Police (DYSP). However, based on the area, size, population and police work the number of SP and DYSP appointed in each district are different. For Varanasi, the number of SP and DYSP are more compared to smaller districts.

The main motive of the Varanasi Police is “Protection of Good and Destruction of Bad”. The Police department of the city is extremely active in maintaining the law, more so because it is a tourist destination with thousands of footfalls every year for various religious and historical tourist spots of the city. It is the responsibility of the police department to look after the comfort of tourists so that tourism gets promoted as well as maintain the civil order in the most efficient way. The roads and traffic are also responsibility of the Varanasi Police within the city which they maintain in the most excellent way. The criminal cases within the city are much controlled and they have successfully reduced the crime rate.

Reach out to Varanasi Police

The best initiative of Varanasi Police to reach out to the people of the city is through their newly opened Facebook account on March 18, 2013. Within a week of opening the account the friend list showed an amazing figure of 5000 people which was a very good response. According to SSP AK Mishra, at first there was only congratulations coming in the account but with days passing people have understood the motive behind creating the account and have started sharing information. This information have helped the Police to lodge FIR, suspend illicit liquor manufacture units, nabbing gamblers and know about house violence. It has helped the citizens of Varanasi in an immense way.


Explore more about Administration in Varanasi