Places to Visit in Varanasi

Varanasi is the holy capital of India. For years the city has been successful in attracting thousands of tourists and is a perfect combination of Hinduism, Indian philosophy and mysticism. This city serves as the mirror of the old Indian age or civilization. It unveils the beauty and serenity of several temples as well many historic places too. This city of Ghats has a lot to offer and has been one of the favorite tourist spots of the world. So get mesmerized by the serene chants and the temples and make up your mind to visit this pure land of ultimate beauty. Here are a few favorite tourist places to be visited in Varanasi.

The Ghats along the Ganges 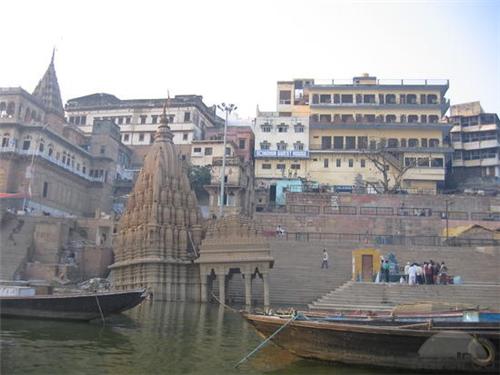 This sacred city is surrounded by the divine river Ganges. The river bank is decorated with enormous pavilions made up of heavy concrete steps stretching down into the main water body. These are known as Ghats and are famous tourist attractions of the city. Some of the notable Ghats here include Dashashwamedha Ghat, Asi, Panchganga, Barnasangam and Manikarnika. You will surely have a memorable time enjoying the eternal beauty of nature. It is considered highly auspicious and fortunate to take a dip in the river to worship the rising sun in the morning.

It was also known as Ramesvaram Ghat and is situated at Juna Akhara. It has been believed that Lord Ram built this ghat and thence dedicated it to Lord Hanuman.

It is one of the revered ghats of Varanasi and a favorite temple of the south Indians and Bengalis too. It was constructed in the southern part of Kashi by the great Maharaja of Vijaynagar. The temple is dedicated to the Lord Shiv, who is an important god in Hinduism. The temple is built according to the ancient Hindu architectural style and is known to have great scenic beauty. Just down the Kedar Ghat is the renowned pond known as the Parvati Kund. The water of this pond is said to possess great healing properties.

Tulsi Ghat is a prominent ghat built in honor of the famous saint poet Tulsidas and is a popular tourist spot too. The poet is famous in the ancient Indian history and is known for his scholarly religious work and also for the holy book Ram Charit Manas. As per the mythology once the manuscript fell in the holy water of Ganga but managed to float without sinking. Tulsidas was a great devotee of Lord Ram and thus was inspired to devote his whole life in the service of god.

This famous mosque was built by renowned Mughal emperor Aurangzeb and is said to be the largest structure located on the banks of the river Ganges in this city. Reportedly, the mosque was built on the same place where once a famous Krishna temple resided. Later the temple was destroyed and replaced by the mosque during Mughal invasion in India. The mosque is famous for its carved pillars, marvelous and enormous domes as well as for turrets. It is located 5 kms from the Kashi Vishwanath temple and there’s no entry fees required to visit this mosque. Reach here by taking an auto rikshaw from the Varanasi railway station and other places.

The temple is known to be the famous Brahmacharinin Durga Temple which is located close to the Durga Ghat on the holy river Ganges. The temple is famous for the imposing and unique structure of Devi Durga. This fine piece of ancient Indian architecture was built in 18th century by a Bengali Maharani and is considered to be one of the revered temples of the city. Thus one must visit it along with the other sites too. The scenic beauty and the ambience of this location are mind-blowing and mesmerizing and peaceful too. It is located 8 kms or 5 miles from the main Varanasi station. An auto rickshaw or a taxi can be the best way to commute to this destination.

This famous temple is situated on the route of Daranagar to Kalbhairav temple. Near to this temple you can find a well, which is considered to be important from religious point of view. It falls on the way from Daranagar to Kalbhairav temple and the timings to visit this place is from 4 am to late night 12 am. Best time to visit this temple is during the months of March till October.

You will be able to find this renowned temple on your way to Durga Temple besides the Asi river stream. According to Hindu mythology Lord Hanuman is considered to be the sankatmochan who is known to protect from the troubles. This was built by the Goswadi Tulsidas. It is also famous as the Monkey temple as it is always surrounded by monkeys. It is situated 11kms from the Varanasi railway junction and 3kms from BHU. It is opened from 5 in the morning to 10 at the night. Take a rickshaw or an auto to reach this temple.

This renowned temple was inaugurated by Mahatma Gandhi in the year 1936 and is known to have been decorated by beautiful marbles. This piece of architecture is a proof of India’s rich heritage and friendly relations among the Indians. It is located 8 kms from BHU and 2 kms from Cantt Varanasi and 3 kms west to Goaulia. Also the timings to visit this place is from 9:30 in the morning till 8 in the evening. You can easily reach this temple by taking an auto or a rickshaw from any part of the city.

It is situated near the Vishwanath temple and is of Devi Annapurna who is believed to be the goddess of Food. It is located 4 kms from Cantt railway station and can be visited from 4 am to 10 pm. Reach this temple by taking a rickshaw or an auto.

It is one of the ancient temples of Varanasi and is situated near the head post office, VishesharGanj. It is dedicated to the Lord KalBhairav and is believed that no one stays in Kashi without his permission. It is located 4 kms or 2 miles from the Varanasi station and entry to this place is almost free. You can reach this temple by taking a rickshaw or an auto from any part of Varanasi.

It is near the Sindhai Ghat and is dedicate to the goddess of remedy, Devi Sankatha. The temple consists of a huge statue of a Lion with nine temples of nine planets which surrounds it. It is located about 6 kms from the Railway junction and 3kms from the BHU and opens from 4 in the morning to 11 at night. Take a taxi or a rickshaw to reach Sankatha Temple from any part of Varanasi.

It is also known as the Sarnath Lion capital and is the national symbol of India. This Sarnath pillar bears the edicts of Ashoka who favored Buddhism. Along with this, the pillar is supported by a canopy which represents an inverted bell-shaped lotus flower, a short and sharp cylindrical abacus with 24 spokes wheel consisting of four animals. These animals are elephant, bull, horse and a lion. They are important from religious point of views. Also they hold a lot of national importance too. It is 24 kms away from the Varanasi airport and nearly 6 kms from Varanasi Cantt. Its entry fees is 2 INR and timings are 9 am to 5pm. Hiring a taxi can be the best way to reach this place.

Sarnath is the place where Lord Buddha is said to have delivered his first sermon after he attained enlightenment. The place is very pure and serene. This peaceful place is also known for the erection of the stupa by great leader Ashoka. The place is surrounded by several renowned Buddhist monuments. So take advantage of this serene ambience and can also enjoy the festival of Buddha Purnima with zeal and enthusiasm here. Take a taxi or a bus to Sarnath from Varanasi.

It is considered to be a unique piece of architecture which was constructed by one of greatest Indian maharajas, Balwant Singh in 17th century. This royal residence of raja is famous for its forts and domes and gives detailed depiction of rich Indian history, the golden period of our country.
It is one of the renowned museums of the world and is popularly known as Banaras Vidya Mandir Museum and is located in the internal areas of Ramnagar Fort. The place is enriched with the royal and classy belongings of the royal families of Banaras along with many handicraft items. It is an amazing place to study the rich Indian culture and one must visit this place.

Carved out of red sandstone, the Ramnagar Fort also has a temple and a museum within its territory. The temple is dedicated to Maharishi Ved Vyas, the writer of Mahabharata, the Indian epic. According to the legends, it is said that Maharishi stayed here for a brief period. An auto rickshaw can easily take you to this fort from any part of the city.

The museum inside the fort displays the royal collection that includes royal palkies, vintage cars, antique clocks, an armory of old guns and swords and more. Ramnagar also houses Chhinnamastika and Durga Temple along with Dakshin Mukhi Temple in its premises. There is a big clock inside the Ramnagar Fort Palace that displays not only the year, month and day but also the facts about the moon, sun and the constellation of stars.

They are important from religious point of views. Also they hold a lot of national importance too.
Thus there’s a lot to be visited in the impeccable city and one can see array of devotees from all across the globe thronging the divine shores of the pure river Ganga and seeking utmost purity and serenity.