Evidence suggests that settlement first came to Varanasi in 12th century B.C. Since then civilization has flourished here making it one of the oldest continuously inhabited cities on the planet. Legends say that this city was founded by Lord Shiva himself and the Hindu epic Mahabharata tells us that the Pandavas went to Varanasi in search of Lord Shiva to atone for their sins. It is also the holiest of the seven holy cities in Hinduism. Symbolic significance aside, the city has flourished since ancient times and is a hive of human activity and commerce. Manufacturing and tourism are the main contributors to the economy with silk weaving being the largest industry. With a population of over a crore like any other place this size the markets here play an important role in everyday life. Post sunset, especially, the markets in Varanasi are teeming with people. The main markets in the city are Chowk, Gyan Vapi, Vishwanath Gali or Lane, Thatheri Bazaar, Lahurabir, Godowlia and Golghar. 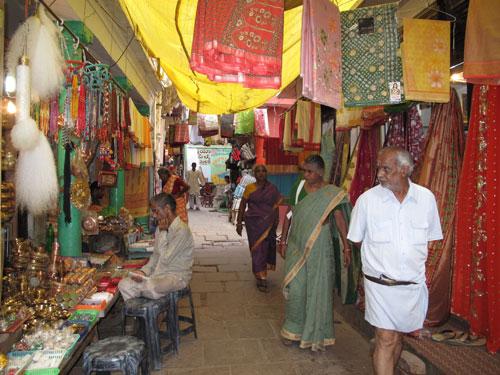 Smack in the centre of this teeming populace is probably the largest and busiest market in Varanasi, Godowlia 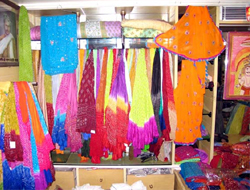 Market. Located in Maheshpur, Godowlia is a 10 minute rickshaw ride from Varanasi Railway Station. Walking to Godowlia would take an exhausting half an hour.
Situated not far from the entrance of the world famous Kashi Temple this market has been around for as long as anyone can remember and the actual market street is flooded with pedestrians, cycles, motorbikes, rickshaws and the occasional car; although not everyone is brave enough to drive through these crowded streets. In the summers walking around the marketplace can get very stifling, however, it is taken for granted since you can’t beat the crowd here, ever! Godowlia has narrow streets lined on both sides by squat buildings and small shops that sell everything from regular everyday household items to hardware, fine silk and brocaded fabrics, shawls, zari work, readymade garments, shoes, beads and bracelets and other costume jewellery. One can even buy and sell shares and avail other financial services from one of the institutions that dot the place. The walkways have been taken over by extensions both legal and illegal made by the local shop owners and the sides of the roads are lined with hawkers selling colourful glass bangles and other trinkets forcing most people to walk on the road but if there’s something that you need in all probability this is where you’ll find it. Even if you aren’t looking to buy anything just walking through and taking a look around should be fun.

Vishwanath lane is another such market. Although smaller than Godowlia and situated a little further away, it is just as crowded with shops lining both sides of the narrow street. Vishwanath Lane takes about 15 minutes to get to from Varanasi Railway Station. Situated in Lahori Tola, Varanasi, these are small local establishments that have been around for years and look like they have been, selling bangles, religious and other trinkets, fabrics, beautiful Banarasi sarees, clothes, etc. The lane is interspersed with tiny toy shops, a few of which specialize in small wooden toys and others where local artisans sell their wares. There are shops selling fabric and readymade garments and after bargaining most things can be bought here at a reasonable rate. There are sweet shops and lots of places in the area where you can get typical Varanasi food so people who get hungry after shopping don’t have to go too far. A Varanasi specialty ‘khatta-meetha’ can be bought in the markets. So if you are looking to buy reasonably priced puja items a walk down the serpentine Vishwanath lane should suffice. 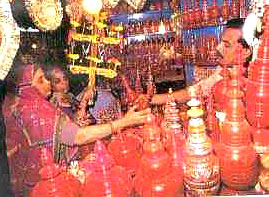 Thatheri Bazaar is known in Varanasi as the locality of brass smiths. The furthest and smallest of the markets, a 20 minute ride in a rickshaw or by car can get one to Thatheri Bazaar. A landmark closest to this market is the Sankat Mochan Hanuman Temple. Thatheri Bazaar occupies a small lane some 50 metres from Chowk which is one of the main centres of Varanasi. One can pick up a brass water pot also known as the ‘kamandalam’ which is often used by ‘sadhus’ to carry water in this market. Besides the world famous silks and brocades one can pick up artifacts decorated with stone inlay work and minakari, which is an art of making jewellery popularized by the Muslim rulers in India. Like most other markets in the city, roadside eateries also make up and integral part of the shopping experience in Thatheri Bazaar with the local food of Varanasi being on offer.

Apart from silk weaving and heirloom sarees, which is perhaps what Varanasi is most famous for, the city offers a whole range of other products. These include copperware, hand crafted carpets, clay toys and the indigenous betel leaf which is traditionally used to greet guests in the Varanasi culture. With the number of festivals and ‘Melas’ or fairs celebrated in Varanasi, these markets are always laden with goods as there is no off-season for these markets.

Explore more about Shopping in Varanasi