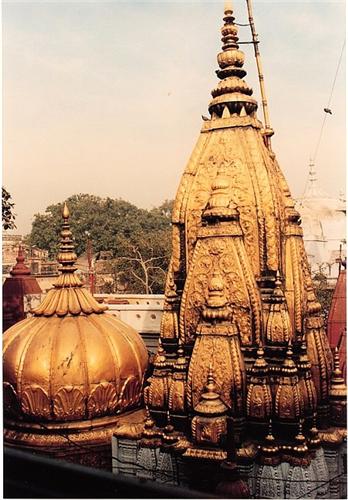 Day begins early at the famous Kashi Vishwanath Temple in Varanasi as Mangala Aarti is performed between 3:00- 4:00 am. Devotees consider it as a blessing to be a part of the Aarti celebrations. So they ensure that all their chores are done and they could attend the same.

The significance of the temple increases due to the fact that it is one of the twelve Jyotirlingas in the country. The temple takes its name from Kashi, as the city is famously called owing to its 3500 years of documented history. The temple, located within the bylanes of Varanasi, can be approached through Vishwanath lane.

The temple has been rebuilt several times during its total existence. It was build for the first time in 1490 and thereafter destroyed by the Mughal invaders who plundered the region. The credit for building the Kashi Vishwanath Temple in its present shape goes to Rani Ahilya Bai Holkar of Indore. She built the temple in 1777.

Kashi Vishwanath Temple is one of the holiest shrines in Hinduism and it is considered auspicious to visit the temple once in a lifetime. Visiting the temple and taking a dip in the holy Ganges is considered to put one firmly on the path of Moksha. It is also believed that if one dies at the temple Lord Shiva takes upon himself to ensure that the devotees attain the path of salvation.

When on a visit to Kashi Vishwanath Temple, you can explore the surroundings too as Kaal Bhairav Temple, Tulsi Manas Temple and the Durga Temple too are located in the close vicinity. Varanasi is also known for its Ghats and some of the famous ones that deserve a visit include Panchganga, Manikarnika, Dashaswamedh, Kedar and Assi ghat.

No visit to any city is complete until you try some of the famous cuisine of the place. Varanasi is no exception and boasts of its typical delicacies which are special to the region. Banarsi paan, lassi with layers of malai, aloo tikia chat and rabri from any of the shops in the Vishwanath gali is something that you need to try.

A narrow by-lane, Vishwanath gali leads one to the historic temple of Kashi Vishwanath Temple. Vishwanath gali can be considered to be a shopper’s paradise as the narrow byelane is home to numerous shops that sell puja items, bangles made from Lac, wall hangings and not to forget the famous Silk Saris of Benares.

A range of options can be explored when it comes to staying in Varanasi. However, if you are keen on attending the daily Aarti rituals at Kashi Vishwanath Temple, you can opt for staying at Sankatha guest house, Suraj guest house, Hotel River view and Ganga Fuji home among others. All of these are budget hotels and are located in close vicinity of Kashi Vishwanath Temple.

How to Reach Vishwanath Temple in Varanasi

By Air
Babatpur Airport located at a distance of 22 km from Varanasi connects the city to rest of the country. Regular flights to important cities as New Delhi, Mumbai, Lucknow and Kolkata operate from the airport. Taxis can be hired at the airport itself to take the devotees to Kashi Vishwanath Temple.

By Road
National Highways 2, 7, and 29 pass through Varanasi virtually connecting the city to rest of the country. UPSRTC buses operate from Golgadda bus station and connect the city to other places within Uttar Pradesh and other neighbouring states.

Local buses, taxis and auto rickshaws can be hired from the bus station to Kashi Vishwanath Temple.