A serene haven located in the majestic and holy land of Varanasi, Hotel Surya is a three star accommodation, famous for its top notch amenities and facilities. Located in the heart of the city, on the Mall Road, the hotel is easily accessible from the Lal Bahadur Shastri International Airport, being favorably located at a distance of around 20km. Further, the hotel lies in the immediate vicinity of the Varanasi Junction Railway station, being situated at a distance of around 5km. 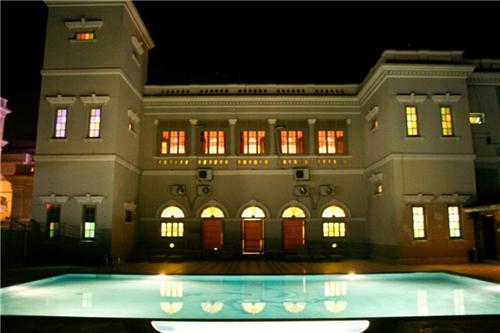 The extremely convenient and justified pricing slabs of its deluxe and premium rooms make it all the more attractive. The deluxe rooms are available for Rs 1800 per night while the tariff of premium rooms is Rs 3,000 per night. All the rooms have a scintillating view of the surrounding gardens and Kaiser Palace.

The ideal time to visit the city would be with the onset of winters, that is, from October to March. Although the temperature dips drastically, the cool winds are more pleasant than the hot bearing sun of the summers. It has its own comfortable indoor Canton Royale restaurant whose lip-smacking offerings span from Indian and Chinese specialties to Mexican and Italian cuisines. It also has an outdoor MangiFerra Cafe, whose offerings include juice, smoothies and snacks. Its funky Sol Bar acts as an added advantage which offers appetizers and drinks, giving the perfect ambience. In addition, the hotel provides local shopping opportunities through its boutique and souvenir shops.

The hotel has various high class and sybaritic recreational amenities like sauna, jacuzzi, outdoor pool, massage parlour and steam room, provided by its own Aarna Spa, a wellness and ayurvedic centre that combines traditional Indian healing with the latest technologies. It also boasts of its own Wi-Fi network and round the cloak room service and security. The elegant rooms with ample furnishings provide for a ravishing experience. The private bath, balcony, temperature control and cable television ensure that the stay is comfortable.

Originally built to sate the desires of Kings and Queens, the banquet halls of the hotel provide a magnificent place to host family functions and other gatherings. The hotel accommodates all aspects of the function, from lighting to catering. In addition, guests also have the option of organizing functions in the hotel’s famous gardens or the poolside. Furthermore, the sublime location of the hotel ensures that all the major tourist attractions are nearby, with Manikarnika Ghat being mere 6km and the holy site of Sarnath at a distance of 9km from the hotel. Other major tourist attractions like Ramnagar Fort, Kashi Vishwanath Temple, Bharat Mata Temple and JantarMantar also lie in the vicinity of the hotel.

The King of Nepal built the magnificent Kaiser Palace in 1818, with beautiful gardens and orchards all around it. Hotel Surya opened in a part of the Palace in 1982, with just eight guest rooms. In 2005, renovations began on the Palace and the hotel took over the splendid palace, originally meant for the King. Now, the hotel has around 60 rooms, spanning three floors. Some call Varanasi, the Cultural Capital of India, owing to its unique location on the holy Ganges and the religious importance that people attach with the place. Once, home to great Indian writers like Kabir and Tulsidas, Varanasi today has become one of the major tourist destinations in India.

With “Quality, Service, Family, Integrity, and Greatness” as its motto, the family run Surya Hotel promises to make a visit to Varanasi fun and memorable, giving a homelike feeling in the busy city of Varanasi, providing the ideal place to retreat after a hectic day.