One of the major attractions of Varanasi is its ghats. There are about 100 ghats in the city located at the banks of the sacred river Ganges. Each ghat has its own tale and is known for its distinct purpose.  Most of these picturesque ghats were built centuries ago by the Marathas, Peshwas, Scindias, Bhonsles and Holkar rulers. Boat-riding along the ghats to get a panoramic view of the colour city, is also a favourite things-to-do option among the tourists. Let us have a look at some of the popular ghats in Varanasi:

It is the most gorgeous ghat in the whole of Varanasi. Do visit the ghat in the evenings to enjoy the spectacular Ganga Aarti and witness the heavenly sight of thousand of floating candles on the river. 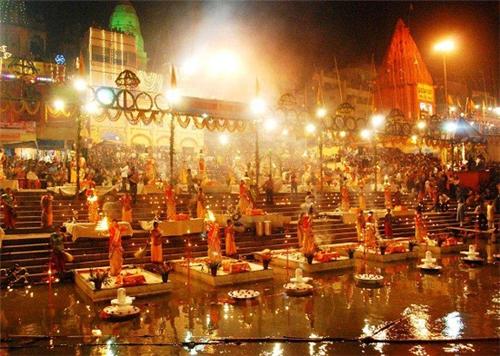 Most of Hindu cremation rituals are performed at this ghat. Though this ghat can be a disturbing sight for many, for Hindus, it is one of the most important ghats in Varanasi.

Another name of Lord Shiva is Kedar and since this ghat is dedicated to Lord Shiva it is known as Kedar Ghat. This ghat is a favourite among the Bengali-Hindus and it is from this ghat a tourist can witness the best sunrise and sunset view. 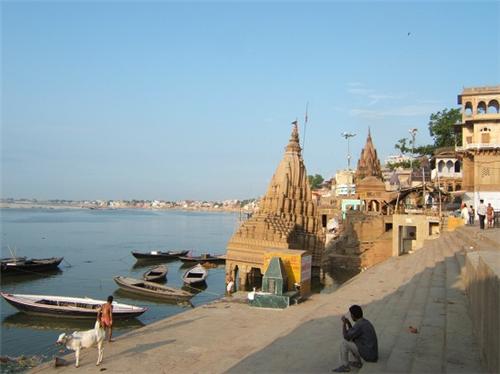 This ghat is highly revered by the Hindus, as it is believed that the Hindu God of Fire Agni was born here. Devotees also propitiate Lord Vireshwara along Scindia Ghat for the birth of a child. The significance of the ghat is the half-submerged Lord Shiva temple. The temple built by ruler Baija Bai is over 150-year-old and its immensely heavy weight of the ghat forced the temple to sink partially. It is a common belief that the massive temple masonry continues to sink even to this date. As per the residents of Varanasi, the staircases of the ghats are gradually vanishing under water and the river has by now gulped around 12 staircases.

The ghat is styled with three rows of marhis or stone turrets. The uppermost row has two enormous turrets, the lower second has six and the bottom most row has five turrets. These turrets are mostly used for resting or sitting purposes.

This ghat is situated north of Manikarnika ghat and is the favourite spot for mediation for early risers. There are a Scindia ghat is one of the rare ghats of Varanasi that is marked for its cleanliness and environment friendly atmosphere. If you get to out from the hustle-bustle of the city and enjoy some peace then do visit Scindia Ghat. 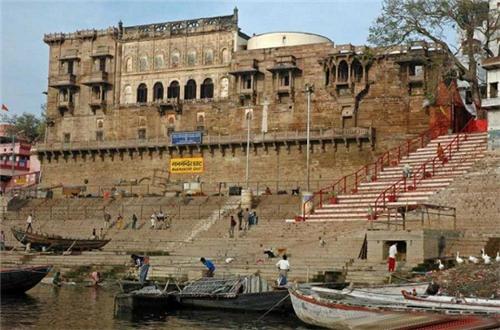 This ghat previously known as Someswara Ghat was built in 1770 by Maharaja Jai Singh II of Jaipur. The ghat is known for the lingam of Lord Someswar, the God of Moon. The ghat was renovated in 19the century by Raja Savai Maan Singh and then onwards came to be known as Maan Mandir Ghat.

The Maharaja built a picturesque stone balcony along the banks that is now mostly used for relaxing and sitting purposes to enjoy the calm waters of river Ganges.

As legend goes, Hanuman Ghat was built by Lord Ram dedicating the ghat to his favourite disciple, Hanuman, hence the name Hanuman Ghat. The ghat is located at the famous Juna Akahara of Varanasi. Since Hanuman is the other name for strength, this ghat witnesses a number of body builders and wrestlers practicing their art every day. As for tourists this is an amazing tourist spot as they get to watch a range of body building activities being performed all day long. 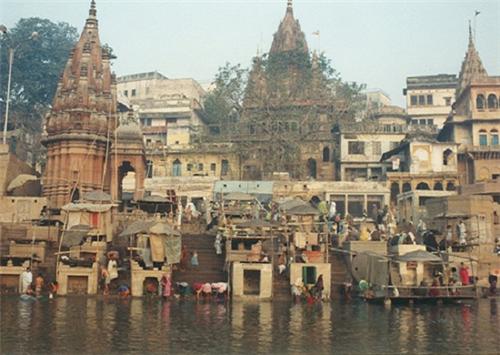 Hanuman temple is also situated adjacent to Hanuman Ghat. A temple founded by Saint poet Tulsi Das is also another attraction near the ghat. Sri Kanchi Kamakoti Peetam Shri Shankaracharya Matam is also another place of visit in Hanuman Ghat. It is said that Vallabhacharaya, a famous Vaishnava saint, educated his pupils on various stories and epics on Lord Krishna on this particular ghat.

Assi Ghat is one of the largest ghats in Varanasi accommodating as many as 22,500 visitors, especially on the night of Shivratri. On a regular day the ghat witnesses an average of 300 devotees and tourists visiting the ghat.

Assi Ghat is the southernmost ghat in Varanasi and is situated as the confluence of two rivers -  Ganga and Asi. The major attractions of the ghat are the two Shiv lingams - one is placed under a peepal tree near the ghat and the other, known as Asisangameshwar lingam, is situated in a nearby marble temple.
As per legends, Goddess Durga after killing demons Sumbha-Nishumbha, threw her sword on earth which took the form of a stream that came to be known as Asi river. 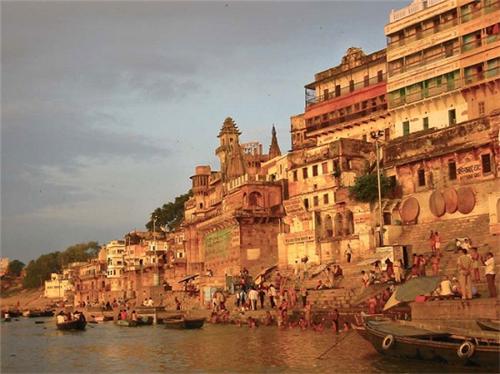 Assi Ghat is known for the huge number of foreign students, mainly from Israel, living around the ghat. A Jewish community located near the ghat attracts Jewish students residing in the city.

It is from Assi Ghat that Saint and poet Tulsidas wrote his famous Ramcharitmanas and later breathed his last. The ghat also finds its name mentioned various religious texts and literature of the Hindus. In the Puranas, like Agni Purana, Matsya Purana, Padma Purana, Kurma Purana and Kashi Khanda, we find the reference of Assi Ghat. In Kashi Khand, the ghat is acknowledged as “Saimbeda Tirtha” which means that anyone who takes a dip in Asi river will get rid of all his sins and achieve blessings of the Lord. January to April, is considered as the holy months and devotees in large number come to Assi Ghat to take a dip. Other important days are Makar Sankranti, Ganga Dushhera, eclipses, Probodhoni Ekadashi, Shivratri etc.

Assi Ghat has two extensions, one is known as Ganga Mahal Ghat that was built by Maharaja of Benaras during 1830s and the other is Rivan Ghat. 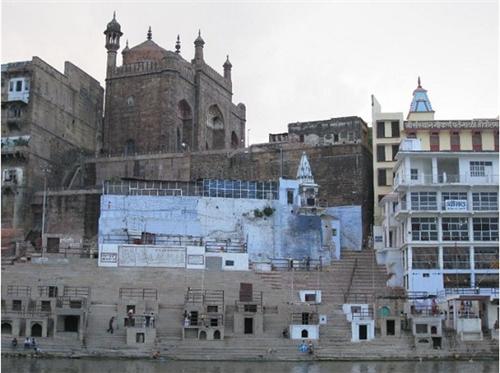 The ghat is located at the confluence of five rivers, that is, Ganga, Sarawati, Dhutpapa, Kirna and Yamuna, making the ghat one of the sacred points of Varanasi. A mosque, built by Mughal Emperor Aurangazeb is located near the ghat which is believed to have been constructed after destroying a Vishnu temple in that same place.

Scholar Vaidant Ramananda, teacher of Saint Kabir is said to have his school at this ghat. Poet and saint Tulsidas is believed to have written his famous Vinay-Patrikahere from this ghat. 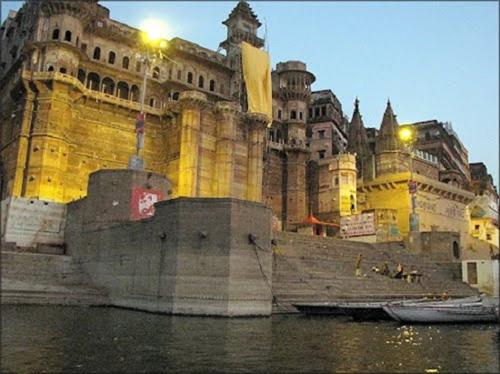 This ghat is located between Darbhanga ghat and Chousaiti ghat. The ghat is mostly known for Hotel Elena, which is situated just above Rana Mahal ghat and the guests of the hotel get a superb view of river Ganges through their room’s window. The ghat is a perfect reflection of Rajasthani architecture. It was reconstructed by Rana Jagat Singh, ruler of Udaipur during 17th century and the ghat was was included in the “Revitalisation of Varanasi” list of 2008-09. This ghat acts as a perfect bathing site for swimmers in summer.