Varanasi is a quaint town located on the eastern regions of Uttar Pradesh. The city is known for its ghats, temples and its tryst with the metaphysical and spiritual world. The city is loaded with interesting mythological histories and for any foreign tourist who wishes to witness the real, traditional India – Varanasi is the place to be. Considering the importance of this tourist city, Varanasi is loaded with automobiles that are always ready to take passengers from one part of the city to other.

While exploring the city seating on the back of the driver’s seat can be a delight, driving a vehicle can be equally frustrating and difficult. Varanasi is known to be above 5000-year-old and is considered as the first continually inhabited city of the world. This is evident from the narrow, winding lanes, which is also one of the trademarks of the city. Driving a four-wheeler vehicle or even so a big truck or a lorry is a huge challenge in the city like Varanasi. Some of the lanes in Varanasi are so narrow that it is impossible for a car to enter the lane. 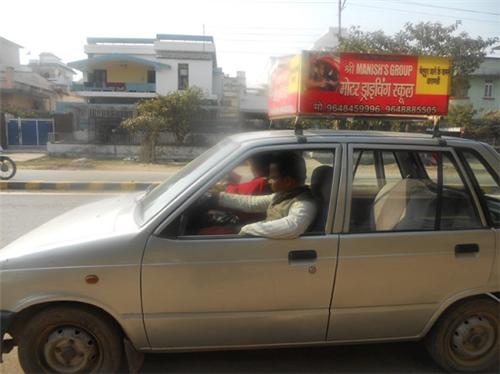 Majority residents of the city prefer a two-wheeler for a comfortable and convenient ride. Three-wheelers like auto rickshaw and cycle rickshaw are also prevalent, but again their entry in some areas is restricted. For a resident of Varanasi, it is always a plus to known the techniques of riding a two-wheeler. There is a driving school in the city that teaches two-wheeler driving. Here’s the list:

Varanasi also has a number of car driving schools where girls and women can enroll themselves and learn driving. Here are the names and contact details of these schools:

Car driving is the riskiest driving experience in Varanasi. This small city is not famous for its rule abiding residents and a little carelessness can result in a major road accident. Though the modern and newer section of the city has wide roads, but it is a challenge to drive without error on the narrow and crowded old roads. There are a few driving schools that take up the task of teaching four wheelers to its residents. These car driving schools are:

Make sure you take all your driving classes seriously as Varanasi is definitely not the easiest and comfortable city to go for a drive.