Dhamekh Stupa is located in the holy city of Buddhists, Sarnath. It is about 13 kilometres away from Varanasi and is the most prominent of all stupas at Sarnath. Dhamekh Stupa, surrounded by a large lawn and well maintained greenery, can undoubtedly be described as one of the most scenic and calm place at Sarnath. The place is visited by Buddhists from all over the world for its immense historical and religious significance. 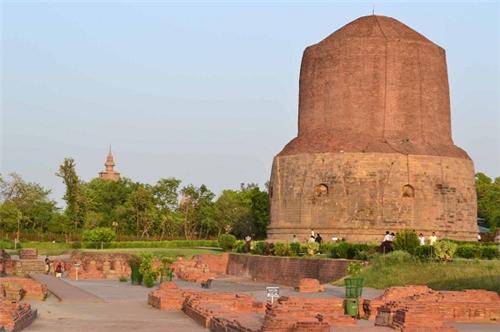 Dhamekh Stupa was constructed in 500 Before Christ Era (BCE) in order to reconstruct another architectural structure that was built by Mauryan emperor Ashoka during 249 BCE. Apart from the site of Dhamekh Stupa, several other monuments were also revamped to honour Buddha’s immense body of work in Sarnath.

Stupas are basically circular mounds that are surrounded by large stones and brickworks. Emperor Ashoka built these stupas to preserve calcined bone ash and other relics of Buddha and his various disciples. Just near the Stupa is the Ashok Pillar along with an edict erected by the Mauryan emperor. This Ashok Pillar is a testament of Emperor Ashok’s visit to Sarnath and his immense faith and dedication towards Buddhist religion. The Lion Capital located on top of the pillar is currently the National Emblem of India.

The stupa has been reconstructed and enlarged on six occasions but the top most part of the stupa still remains unfinished. Colonel Cunnigham from Royal British Army was the first person to excavate the stupa during early 20th century.

Historical records of Chinese traveller Hiuen Tsang reveal that during 640 Before Christ Era (BCE) there were more than 1500 priests residing in Sarnath and the main Dhamekh Stupa was about 90 metre or 300 feet high.

Dhamekh Stupa is built amidst a deer park known as Rishipattana. It is this historic place where Lord Buddha gave his first sermon and revealed for the first time the “Dharmachakrapravartana” Eight Fold paths that lead to Nirvana, to his five disciples after gaining enlightenment.
Presently, the stupa is 43.6 metres high with a width of 28 metres. It is regarded as one of the most enormous stupas in Sarnath. The basement of the stupa is believed to have its origin during emperor Ashok period. The stupa is made of chiselled stones with beautiful floral carvings that dates way back to Gupta period. The walls of the stupa have delicate carvings of human figurines and birds along with Brahmi scriptures. Buddhist pilgrims from all over the world visit Sarnath to worship Lord Buddha and circumambulate the sacred Dhamekh Stupa.

There are a number of tourist attractions near Dhamekh Stupa. Mulgandakuthi Vihara, Archaeological Survey of India Museum, Digambar Jain temple, standing Buddha statue at Thai Buddha Vihara, Buddha temple, Chaukhandi Stupa and other excavated archaeological sites are some of the attractions at Sarnath.


How to Reach Dhamekh Stupa

Dhamekh Stupa is located right at the centre of Sarnath and can be reached by auto-rickshaws, cycles, cars and buses after reaching Sarnath. To visit Sarnath, get down at Varanasi rail or Varanasi airport. From there you can take a cab or a bus ride to Sarnath.
Dhamekh Stupa Address: Dharmpal Road, Sarnath, Varanasi, Uttar Pradesh - 221007