There are a number of good tourist spots in and around Varanasi that are loaded with historical importance and beauty. Every year hundreds of tourists make it a point to visit these surrounding places while on their trip to the holy city. One such place is the Chaukhandi Stupa, which is situated at a distance of 13 kilometres from the city at a quaint place called Sarnath. This ancient stupa, covered with brickwork, has a strong Buddhist connection and is believed to have evolved from centuries old burial mound. Chaukhandi Stupa also serves as a memorial for a relic of Lord Buddha. 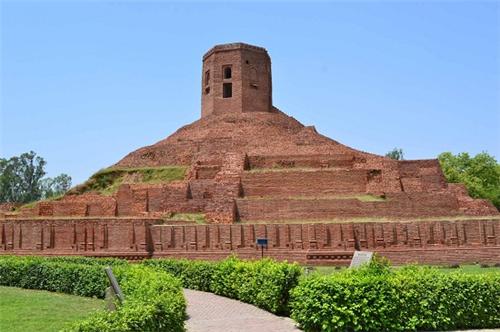 During 4th-6th century, Gupta rulers who were also known for their immense faith in Buddhism, built this Buddhist terrace temple. It is said that Chaunkhandi Stupa is the place where Lord Buddha first met his disciples while on his journey from Bodh Gaya to Sarnath.

In later years during medieval era, son of Raja Todarmal, Govardhan, revamped this place and gave the present day shape. The stupa got an octagonal tower shape and it is commonly believed that Govardhan built the tower to honour the visit of Mughal emperor, Aurangazeb.

Another story revolving around the inception of the octagonal tower is that it was Mughal Emperor, Akbar, who had ordered his finance secretary, Govardhan, to build this tower on top of Chaukhandi Stupa in 1588. A Persian inscription on the doorways of Chaukhandi Stupa reads, “As Humayun, king of seven climes, now residing in Paradise, had a wish to come here and sit one day and increase the splendour of the sun. So Akbar, his son and humble servant resolve to build on this spot a lofty tower reaching the blue sky.”

Because of its immense historical significance, the stupa is a popular tourist site in Uttar Pradesh. It is also a revered place for the Buddhist. Chaukahndi Stupa taken care of by Archaeological Survey of India. The serenity of the place that is adorned with lush greenery has the power to soothe and relax one’s mind and is regarded as a perfect place for meditation. The stupa is also the gateway to Buddhist’s holy place, Sarnath. 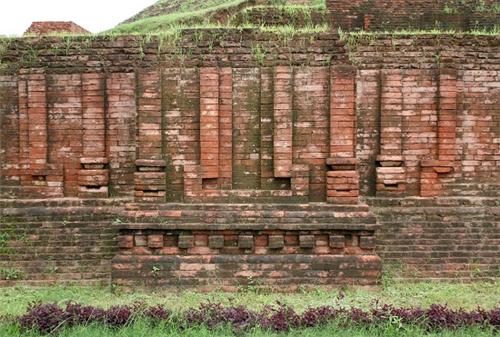 The Buddhist city, Sarnath, has a number of stupas all over its place. Apart from Chaukhandi Stupa, the is Dhamekha Stupa, Dharmachakra Stupa, Dharmajika Stupa, Mulagandhakuti temple, Mulagandhakuri Viraha, Archaeological Survey of India museum, 80 feet high Buddha statue at Thai Buddha Vihara and various archeological ruins. All these attractions are located at a throw away from Chaukhandi Stupa and if you are on a tour to Sarnath, do not miss out these interesting places.

How to Reach Chaukhandi Stupa

To visit Chaukhandi stupa you have to first reach Sarnath that is 10 kilometres from Varanasi. There is rail and road connection to Sarnath from Varanasi. It is 27 kms from Varanasi International Airport.
Chaukhandi Stupa is located on the left side of the Main Road that is about 600 metres before Sarnath’s Archaeological Survey of India.

There are a number of good accomodation places like hotels, inns and guest houses in Sarnath, if you wish to spend a few days in the sacred city of Buddhists.